1968 - The Balentines sold the Hotel to Dale and Milton Smith who operated the Hotel for four years. Thereafter, various others would own the Hotel and in 1982 it was renamed The Springs Inn.

1999 - Sharron and Ray Croft became the new owners of the Hotel. They were responsible for beginning the renovation that would save this historic landmark. The hotel was called the Rocksprings Hotel.

2006 - Mildred Fleischer Williams assumed ownership from her daughter, Sharron. Sharron’s sister Evelyn and her husband, Chris David took over managing the Hotel and built up a loyal following of guests. They renamed it the Historic Rocksprings Hotel.

2009 - Debra and Craig Wolcott, of Houston, Texas, purchased the Hotel and began an extensive renovation while continuing to welcome guests to the Hotel and to the town of Rocksprings. They were quite curious to see if the “haunted hotel tales” were true.

2010 - On May 1st, a hail storm blowing horizontally with rotation, hit the town of Rocksprings. The new roof of the Hotel was damaged, thirty-two windows on the west side were blown out, and eleven window units were ruined. After the event, a guest staying in Room 211 came down the stairs and calmly told the proprietress that the west window had blown out of his room and that there was hail blowing into his room. The proprietress replied, “That is not a problem. I will move you into another room.” 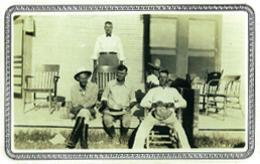 1927 - The Rocksprings Tornado struck on Tuesday, April 12, 1927. Most of the town was blown away late in the afternoon. The twister cut a swath two miles wide. Approximately seventy-two people died. Only about ten buildings were left standing. Before the tornado, the Hotel had been enlarged with a new fourteen room, two-story, concrete addition. The addition survived the tornado, but the old Hotel’s roof, some windows, and the Verandah were blown away. Once again, the Hotel would serve as a hospital

1918 - During World War I, there was an influenza epidemic.  The Hotel served as a temporary hospital for the very ill patients.

The Hotel was sold to Mr. and Mrs. Jack L. Balentine. They opened the establishment as the Balentine Hotel on February 1, 1918 and would continue to operate the Hotel for over fifty years. 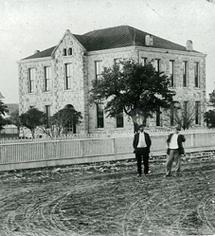 Please come to Rocksprings, Texas and stay with us.
There is a place for you in the Hotel History.
Make the HRH your Hotel.

The Gilmer Hotel was a wooden, two-story structure, with a lower and upper Verandah.

1939 - The Balentines started a major remodeling project. The oldest part of the Balentine Hotel was torn down. A modern Mission Style Verandah was built with a new lobby, dining room, kitchen, living quarters, and second story.

1940 - The “new modern Balentine Hotel” opened for business on April 30, 1940. An unusual event for the Balentines which occurred later on, was the capture of the notorious outlaw “See More Kid" at the Hotel, with the aid of the Balentine’s twelve year old grandson, Rodney. The “Kid” had been terrorizing ranchers in a multi-county area for several weeks. He registered late one night at the Hotel. Rodney identified the “Kid” to Sheriff Dor Brown and he was promptly arrested. The Associated Press called Rodney a hero.